As a result of the current highly contagious COVID-19 pandemic, the practice of wearing a face mask in public is

END_OF_DOCUMENT_TOKEN_TO_BE_REPLACED

In the 1980s, I grew up in a small town in the California Bay Area.  Was it diverse in population?

Disclosure: The reviewer has been compensated in the form of a Best Buy Gift Card and/or received the product/service at

END_OF_DOCUMENT_TOKEN_TO_BE_REPLACED

I was sitting here on the couch with the kiddo last night, watching Tom and Jerry for the 342,892,758,729,514th time this week and for some reason my mind went back in history. I had been having the kind of day where I just kept seeing him in me.

When I was a baby I had a Pooh bear who I could not leave the house without. My mom had told me stories about how upset I would get and the meltdown I would have if he was ever left behind. I had to take my bear anywhere we went.

I went back to look at photos and my Pooh bear shows up in so many of them. I really did take him everywhere… He was with me while I was sleeping. He was my “baby” in the toy stroller. He was sitting next to the mud puddle watching me play. He was often tucked up under my arm. I’m not ashamed to admit that he went to college with me. Even now, he sits in my bedroom watching over me as I sleep. If you look closely at the picture below, you can even see the stitching that my 5-year old self did in giving him a new red shirt and black nose.

I remember losing him one fall, long long ago. I was devastated. It was literally the worst thing that could happen to me. I searched everywhere for him. He was gone… I spent the winter beyond depressed, upset that my beloved Pooh was gone. I probably drove everyone to insanity constantly asking and lamenting over him. That spring I was outside playing and kicking around leaves from the leaf pile we jumped in just a few months before. I kicked him. I was beyond excited! I ran into the house with him just screaming. My mom wasn’t so thrilled but (blessedly) washed him and tried to salvage my bear. 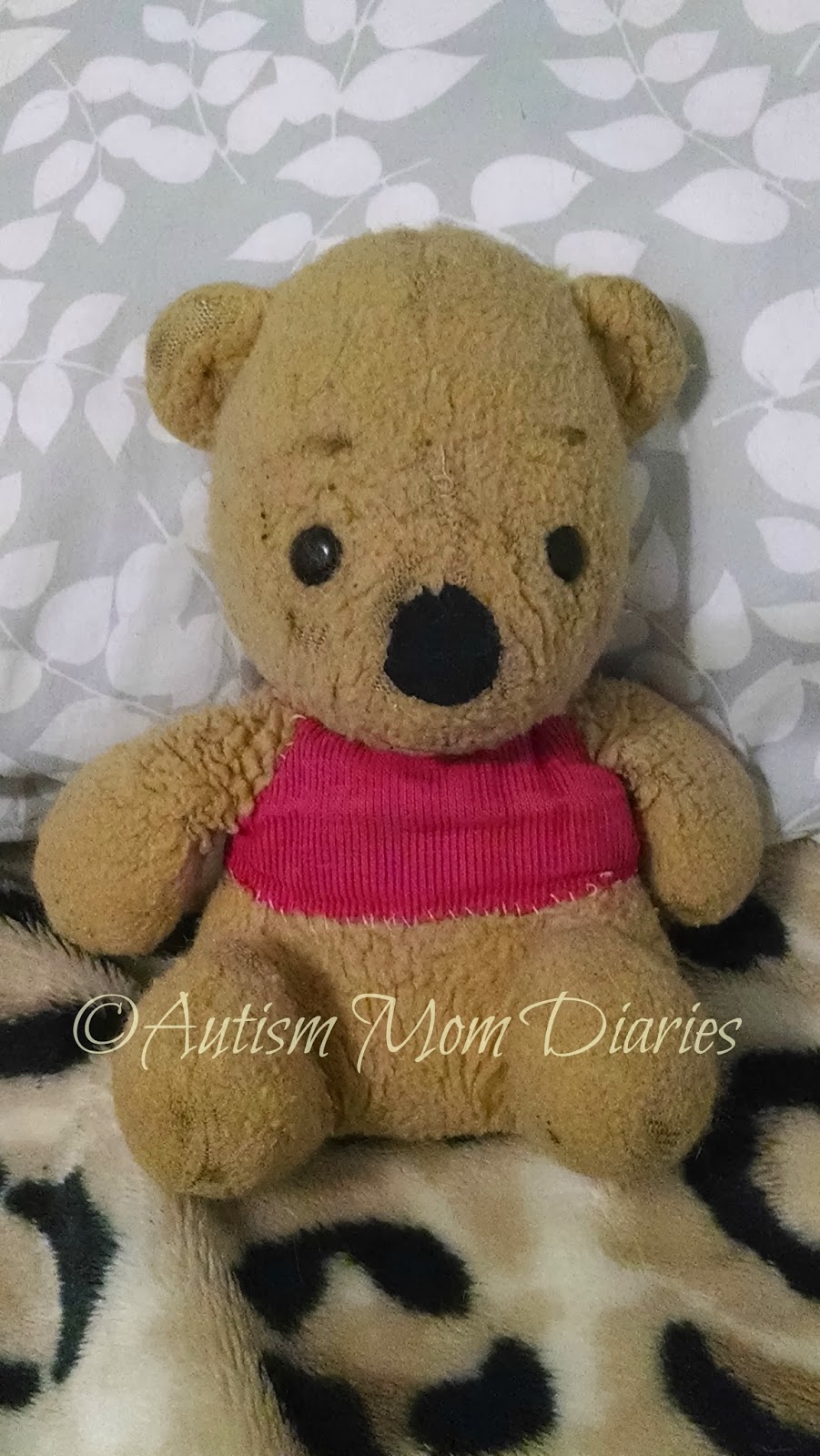 I will never forget the day a couple of years ago when I was sick with a migraine and couldn’t even get out of bed. I was out and lost to the world, unable to move, breathe, anything without the room spinning. I recall my arm being moved, something being tucked up under it, and hearing footsteps creep away…

I looked up and discovered that Sparky had literally scaled the wall, plucked my Pooh bear from the high shelf he was sitting on, and placed him under my arm for comfort. I asked him why he got Pooh down. He said simply that because he was my bear and I was sick, so I must need him for comfort.

(No empathy my arse…)

Not once had he seen me cuddle this bear. Not once had I mentioned anything about this bear. He just knew, on his own, what the bear signified and decided that I needed him. He was about 8 at the time.

Sparky didn’t have anything that he was attached to when he was a toddler. He was three before he found something that had that affect on him. Once he found it though… Oh man… I got a taste of what I had put my poor mother through. 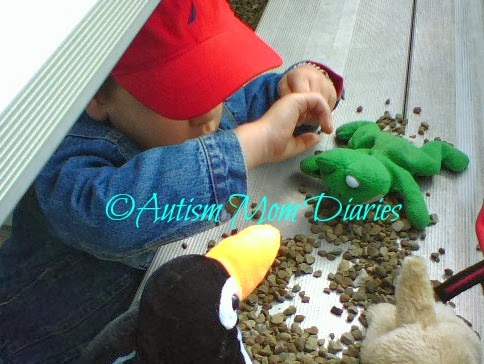 My son had come across a stuffed frog at the day care he attended. It was already well loved and was missing an eye. He hated leaving that frog behind every day and would have a major meltdown every day when we left. It was always the first thing he went for when we arrived in the morning. After about 2 weeks the day care staff gifted the frog to him because he loved it so much.

Over time he added to the posse who left the house. We added in a red puppy and a raccoon. To this day, the raccoon (also the first animal he’s EVER named) is the one he takes everywhere.

(The puppy, the frog, and the raccoon- all ninja’d out of the kiddo’s room while he slept:) 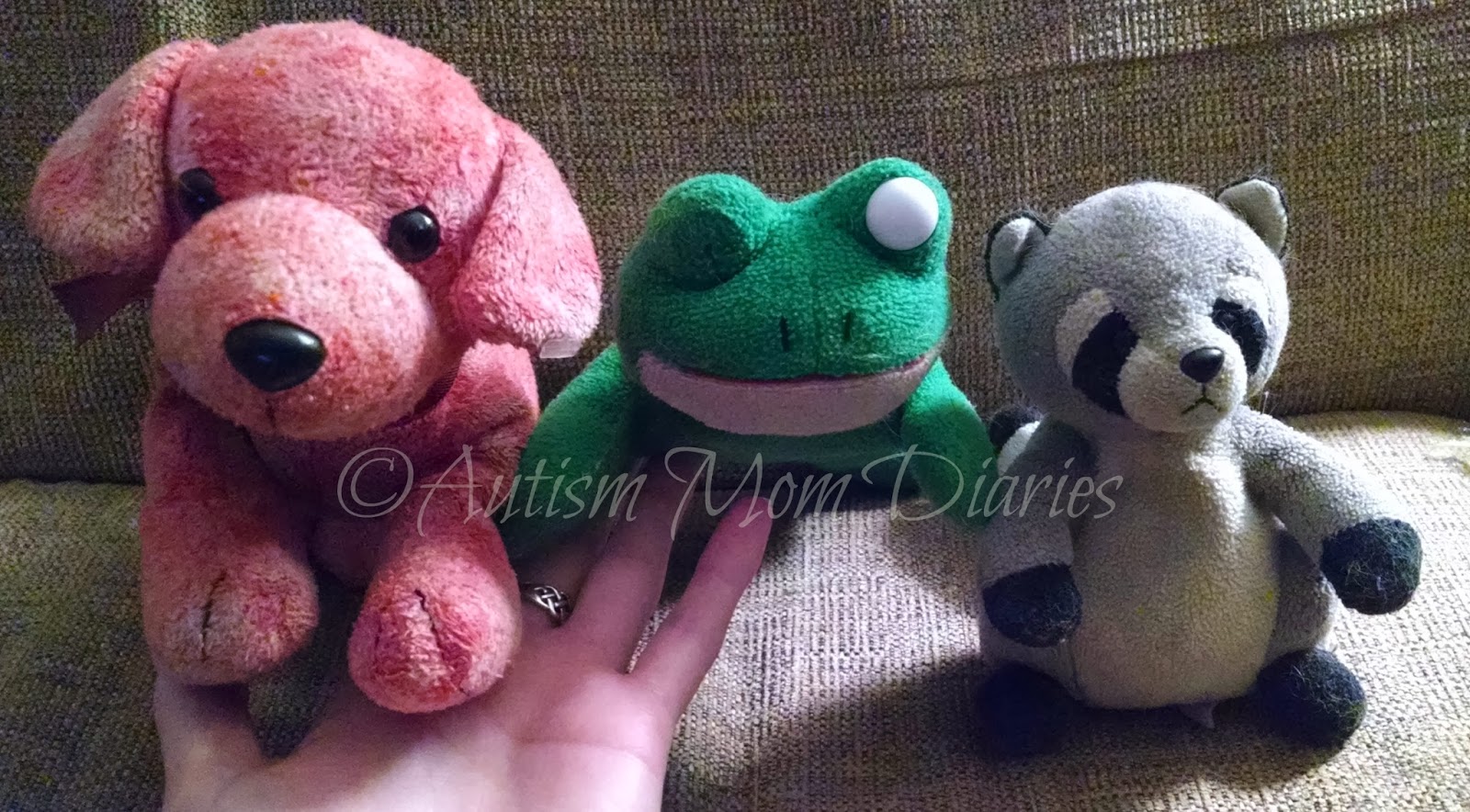 To this day his animals still live just as well as my Pooh bear does. With us in our rooms, by our beds. The frog, the puppy and the raccoon all well loved. And Pooh bear, threadbare and also well loved.

(Editor’s note: I feet it appropriate to tell you that I wrote this whole post with my Pooh bear tucked under my chin. I came downstairs with him in my hands and Sparky looked at me and asked me why I had my Pooh bear. I told him I just need him. He smiled and kissed my cheek. Love this kid!!)

……My sister came to visit and relieve me from my temporary single parent status. We decided to go to the

“Hi, I’m Sarah, this is my son Josh and we will be annoying you today.” There was a time when

Last night, our home coach was pretty silent as Big Brother raged away. Later I asked her why. In response

I wonder if there is maybe more than one type of autism spectrum disorder.  Maybe there is an autistic like

A blood curdling scream and then CRASH!  A broom flies across the room!  Next a chair topples over.  Flying books!