Autism Light #443 is Jacob Allen.Jacob Allen is 4 years old and has autism. He lives in Arkansas Pass, Texas. On January 1, 2016, Jacob found his father Bryan Allen passed out from a diabetic attack and proceeded to get himself dressed and go to a neig…

END_OF_DOCUMENT_TOKEN_TO_BE_REPLACED 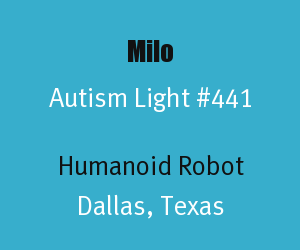 RoboKind was formed in 2011 and Milo is a descendent of the Zeno R25 robot they created in 2013. Christopher Everett Tracy describes the specs on Milo.

Milo stands at just under two feet, weights 4.5kg, and has the face of a young boy…. The oversized doll is nothing short of a technical marvel. His brain is an OMAP 4460 dual core 1.5 GHz ARM Cortex A9 processor and he has 1GB of RAM as well as 8GB of memory, which can be expanded via a MicroSD slot. He has a 5-megapixel autofocus camera in his right eye, as well as a battery of visual algorithims to detect colours, motion, faces, and QR codes. His CompuCompassion system gives Milo the ability to identify and respond to emotions. And of course he has Wifi and Bluetooth connectivity (Tharawat, Christopher Everett Tracy, November 6, 2015).

The following is a video of Milo’s background and how he works to help young people with autism learn.

The Robots4Autism curriculum currently can be used in elementary and middle school. “The objectives of robot therapy include learning to pick up emotions, express empathy, act more appropriately in social situations, self-motivate, and generalize in the population (RoboKind Website, Robots4Autism Curriculum).”

Dr. Pamela Rollins is the author of the Robots4Autism curriculum. In the following video Dr. Rollins describes the curriculum.

Milo has the potential to accomplish great things for autism and also reduce the cost of autism treatment. “Educating a child with autism can cost from $17,000 to $22,000 a year, according to the company. The cost for a Milo robot including the curriculum is $5,000. RoboKind’s representative said that some insurance companies have helped reimburse the cost (Medpage Today, Shannon Firth, March 9, 2015).”

Like any therapy Milo will not be effective with every single person on the autism spectrum. Dr. Rollins indicated that children that Milo seems to be the most effective in treating have picture symbol recognition, ability to answer yes/no questions, ability to understand cause and effect, and ability to use a table to communicate (Medpage Today, Shannon Firth, March 9, 2015).

Milo will last up to 3 years but is also designed with the capacity for an upgrade. At the time this post was written RoboKind is only selling Milo to institutions that will use it in concert with the Robots4Autism curriculum. Robokind has a web form that parents and caregivers can complete to refer Milo to their child’s school.

Milo is not intended to replace a human therapist but is an additional tool that can be used to facilitate more hours of instruction. One of the advantages that Milo has is he can endure unlimited repetitions without ever becoming frustrated in the middle of a therapy session or life lesson. The data and video that Milo can collect efficiently is also priceless to autism treatment plans.

Social Media: You can follow Milo on the following social media areas.

Special thanks to Milo for being an Autism Light. This breakthrough in technology is promising for autism therapy and it will be exciting as it is more widely adopted and becomes increasingly an affordable option for research based autism therapy with some children with autism. We look forward to hearing great things about Milo in the future.

Autism Light honors diverse heroes to the world of autism.

The Perot Museum of Nature and Science opened in 2012 and quickly became known as a “living science lesson.” The

Our experiences over the years with the public school system in Texas have been varied. We have met some very

“A child with autism grows up to be an adult with autism.”This saying is often repeated in the Autism Treatment

March 18, 2022March 18, 2022 Joel Manzer 1
Disclaimer
Information shared on Autisable.com is intended for informational purposes only. It is not a substitute for professional medical advice, diagnosis or treatment. Never ignore professional medical advice in seeking treatment because of something you have read on the Autisable website. If you think you may have a medical emergency, immediately call your doctor or dial 911.
Loading Comments...